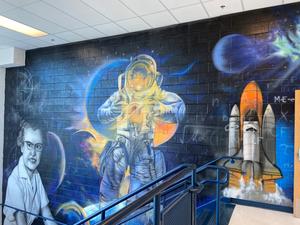 Dixer, a parent of an eighth-grade student, spoke at Career Day about his work and art and was asked by staff to paint a mural

Emmanuel Chavez Galicia, known as Dixer, attended his eighth-grade son’s career day at Katherine Johnson Middle School (KJMS). Dixer, owner and master tattooer at Dixer Tattoo in Fairfax, is also a multimedia artist. The artist spoke with students about his path to become a full-time artist. Dixer studied environmental engineering in school and was not formally trained as an artist. He wanted to teach the middle school students about how they can have a future in art themselves. The students were not the only ones impressed. The staff at KJMS mentioned they were hoping to find an artist for a mural in the school to help celebrate the school namesake, NASA mathematician, Katherine Johnson. Dixer was up for the task.

“The value of life is not in its duration, but in its donation. You are important because of how effective you live.” This quote is not only on Dixer’s website but is used as a guide for his own work and life. Dixer was drawn to the mathematician’s passion, accomplishments, and legacy. For his mural, he incorporated Johnson’s likeness in addition to math equations, an astronaut, and space themes. Using free hand, spray paint, air brushes and traditional paint brushes, the mural was completed in a week and was dedicated in December. At the ceremony was Valerie Johnson, Katherine Johnson’s niece and a math educator and author.  “I am so honored to be a part of this today, and so amazed by this incredible art,” said Valerie Johnson.

Dixer spoke with students at the ceremony and discussed his inspirations. “There is a movement going on around the world where we are trying to bring in the achievements that minorities have done for society and culture. There is no bigger inspiration when you see somebody being represented.”

Principal Dr. Tammy Sillipigni shared her goal for the mural. “This mural can be seen as our students go from class to class, but it will also be able to be seen as people drive by with our large windows. The lights will be on and everyone in our community will know who we are and all the great things we are doing.”