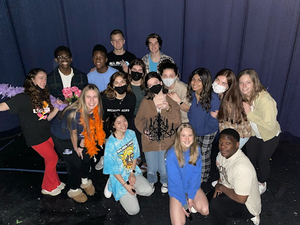 This year marks the return of the FHS Fashion Show! After last year’s virtual show format, the FHS Marketing program students were ecstatic for the return of this in-person production on Friday, March 23. For over 10 years, the FHS marketing department has hosted the show, completely organized and executed by students taking Marketing 1 & Advanced Marketing and Fashion 1 & Advanced Fashion Marketing. The 2020 show was set to be held in late March  but was cut just one-week shy due to the Pandemic. The 2021 show was a virtual production. Fairfax HS’s marketing program is the only school in all of Fairfax County that  produced a show this year.

A much-loved spring showcase of what Fashion Marketing students have learned, the fashion show is always anticipated by the FHS community. Each year, it is held in late March during the last period of the day, where classes can sign up to watch the show. The planning process, starting around early February, begins with the creation of theme ideas and clothing look-books, later voted on by each class. Past themes include: “The Rebel Wears Prada,” inspired by several fashion magazines, such as Vanity Fair and Thrasher, and “All Around the World,” which featured looks from major fashion cities, including Paris and London.

Last year's virtual show, inspired by popular Netflix shows during the Pandemic, was curated through a compilation of 127 YouTube videos. FHS marketing students worked tirelessly in an entirely online setting to ensure that the show lived up to its former glory.

This year, the theme “Festival of Lights” totals six scenes, including a final senior prom scene (often accompanied by a “prom-posal”) inspired by the Met Gala.

“Each year, the themes that my students come up with are better than the last. I am always blown away with their dedication to carrying out the theme, along with their immense creativity,” says Kay Walters, who has been the Executive Director of the Fashion Show for the last 10 years. She and her students work strenuously backstage to plan each scene by coordinating with their groups, models, and vendors to make the show as smooth and successful as possible. “Through the show, students learn the value of teamwork and communication, which is a critical component of the marketing experience. They plan, choreograph, and present a fashion promotion event, which is something many don’t endure, while these students “own” this show before graduating high school,” adds Mrs. Walters.

Junior Riya Menon reflected on her experience of the planning process. “I’ve learned a lot about time management and having to be able to adjust to road bumps, along with definitely paying close attention to detail,” Menon says.

After planning is finalized, marketing students themselves communicate with local vendors to get the show up and running. Fairfax has established relationships with brands including David’s Bridal, Macy’s, and Target, who are generous to lend apparel.

“Working with a vendor sounded terrifying at first but now I feel confident in my ability to contact and create a professional relationship with a company,” says senior Ashlyn Dahl. “I have learned a lot from putting this show together, things like creating an impactful and professional relationship with a big company, following a strict timeline, collaborating with peers, and growing stronger communication skills.”

The Fairfax HS community was excited to see the return of the fashion show just like in previous years, with this year’s set better than ever before!

Lenna Kevorkian is a senior at Fairfax HS.