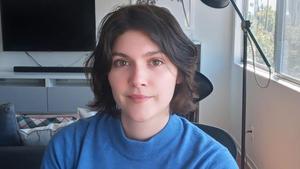 Winners will be announced March 26

Emily Dillard, a 2017 alum of Fairfax High School and Fairfax Academy is making the news with her nomination for the prestigious Television Academy foundations College Television Awards. She is nominated, along with Savannah College of Art and Design classmate Nicola Rinciari, in the Scripted Series category for the film Our Side which was created during their time at SCAD.

A total of 54 students have been nominated in six categories for the 2022 awards selected from 185 entries submitted from 58 colleges nationwide. Designed to emulate the Emmy® Awards, student entries are judged by Television Academy members. The awards ceremony will be held in conjunction with the Foundation’s College Television Summit, a two-day educational event featuring panel discussions with media-industry leaders on March 24-25. Winners will be announced on March 26.

“Emily Dillard is every teacher’s dream, every director’s gift,” said Erich DiCenzo, Fairfax HS Academy theatre instructor. “What I remember being most admirable about Emily is her willingness to take risks and try new things. She has a unique urgency [for her age] to expand her horizons. Wise beyond her years – and perhaps a testament to the true artist inside of her – Emily has a desire to better understand the world in which she lives. She is constantly challenging herself in an effort to grow as a student, an artist, a daughter…a human being.”

“Emily Dillard is a presence when she walks into her room. Her energy, passion and enthusiasm are intoxicating,” said Andrea Cook, Emily’s Academy dance director and current Academy Administrator. “I remember having a career discussion with the advanced dancers and when a peer asked Emily what she wanted to be, she confidently replied an entrepreneur. The rest of the class looked at her with confusion, but you could see in her eyes that she had big dreams and nothing would get in her way. She was not going to be limited to a single dream. The world is her oyster. Emily is a world changer and will forever impact those who enter her sphere, even if only for the briefest moments.”

The Fairfax Academy for Communications and the Arts in Fairfax HS is a “school within a school”, designed to provide students throughout Fairfax County Public Schools with advanced opportunities in a number of programs including theatre, dance, photography, fashion design, foreign languages, television production and social media marketing. The Academy instructors, many former industry professionals, go beyond the curriculum to prepare students for post-high school and college life within a number of creative and professional industries.