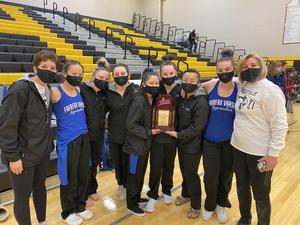 On a cold Saturday morning in February, Fairfax High School gymnastics coach Susan Barborek knew her girls had a good shot of winning the Class 6 state tile. They had scored 145 points – something no other team had done all year. Coming into the competition, which had been delayed twice for weather, the team was quiet, calm and confident. When the winners were announced, the Lions became the first gymnastics team in school history to win states.

“These girls are something special,” said the five-year head coach. “They overcame so many challenges this year with COVID, I am just so proud of them”. She has every right to be proud. With only seven members on the team, all the athletes contributed throughout the year. The girls had something to prove in 2021. Last year the team came up short in regionals after winning districts. But in 2021, after an uncertain season with new restrictions that meant their friends and family members could not watch, the athletes overcame all the uncertainty and hurdles and grew together both as a team and as individuals.

Coach Barborek credited all seven team members for their contributions.

Payton Morrison, a junior, went on the following day to win the Virginia state all-around individual title as well as placing place in the top three in all individual events taking first on floor and beam and second on bars and vault. Payton is “calm, confident and comfortable,” says Barborek. “Not only is she a great gymnast, she’s a good teammate and just a joy to coach.” Barborek feels Morrison will be seen as one of the best gymnasts Fairfax HS has ever produced.

Freshman Kendall Vess was new to the team this year. Vess had to learn the differences between competing in high school gymnastics vs. club gymnastics and quickly became an integral part of the team. Vess is “driven with high expectations and all the talent,” says the coach. “We can’t wait to see what she does in the future.” Vess earned the highest score on the uneven bars at the state competition on Saturday with a 9.45.  She also qualified to compete in the individual competition on Sunday on beam and floor exercise placing second on beam and third on floor exercise.

Senior captains Sienna Williams and Vivian Stone’s leadership set the tone for the team the entire season. “This is a great group of girls and the two captains really kept everyone together and in focus all season.”  Stone was a steady and consistent competitor contributing to the overall success of the team and setting personal bests on vault and floor this season.  Williams, a strong all-around contributor,  set ambitious goals learning new skills on each event throughout her time on the team and successfully competed them in the state meet.  Her execution of these skills led her to show the most improvement in her all-around score this season.

Junior Gracie Sergent “is the Energizer bunny,” says Barborek. “She kept our energy up all season with her enthusiasm and spark.” Without having any fans in the gymnasiums, the meets could get quiet. But Sergent was always there in practices and competitions leading dance parties before and between events and at practices keeping the coaches laughing. Not only did she bring energy to the team, but she was also a great competitor showing off her beautiful dance skills on the beam and floor exercise. “Every team should be so lucky to have a Gracie on their team.”

Sisters Emily and Riley Sarber rounded out the team. Riley, a sophomore, brought a free spirit and lightness to the team. But when it was time for competition, Riley was “all business,” said Barborek. Riley was a tremendous competitor on all events and was someone the team could count on to hit her routines consistently.  Emily, a junior was “determined and focused” all season, which she showed at the state finals.  After overcoming an injury that limited her to beam and vault, she worked diligently to recover her skills and perfect her routines.  At the state meet, she stuck her beam routine at a crucial moment in the competition which shifted the momentum for the team on their last event and also scored a season high at the same time. Emily is a competitor who can be counted on in clutch moments.  The two sisters, while different from each other, complimented the team and were strong contributors in the district, regional and state competitions.

The team celebrated the final win as they did from the start – with masks on, together and without fanfare. “I know this wasn’t what you envision when you think about winning a state championship, and I am sorry the girls didn’t get to celebrate with their families, but I could not be prouder of these kids,” said Barborek.