Fairfax Girls Basketball Finishes Season with Eye on the Future 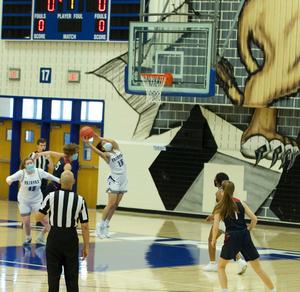 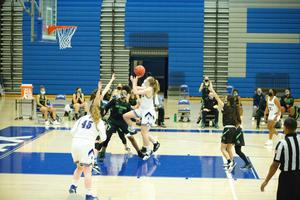 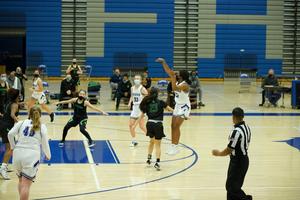 For some coaches, a 4-11 record might not be something to feel hopeful. But for Pat Deegan, Fairfax High School Lions girls varsity basketball coach, it is a sign of great things ahead. “I have been coaching, at various schools since the winter season of 1980-81 and never before have been blessed with so many young players,” said Deegan. In the final game of the season, the team started four sophomores and one freshman.

After losing stars Melanie George and Sam McNaughton (both went on to play Division 1 basketball for West Point), Deegan had just four upper classmen on the team.  To add to his challenges, the season started with strict COVID protocols and an uncertainty with how the kids could play. With strict adherence to the mitigation strategies placed by Director of Student Activities Nancy Melnick, the team had one positive test during tryouts, but none throughout the regular season.

With such a young team, Deegan could see the players struggling due to lack of experience. But he was impressed with how hard the girls practiced. “Our players got exponentially better as the season progressed,” he praised. As a show of their dedication and hard work, the team beat rival Woodson at the end of the season 46-37, avenging an earlier loss and playing the best game of their season. “Dramatic turnarounds like this one are rare in high school basketball,” said the coach.

Three players were recognized with All District honors. Sophomores Molly Brunk and Elyse Autrey were named to the Second Team All Patriot District League and the freshman starter Andrea Iriarte was selected to the Patriot District All Defense team.

“Given the anxiety regarding COVID and our kids not being in the buildings, we could not have predicted how our season would go,” said Deegan. “While we did not have as many wins as the team would have liked, our growth as competitors and teammates proved how valuable interscholastic athletic programs are for high school kids. It was a great ride.”