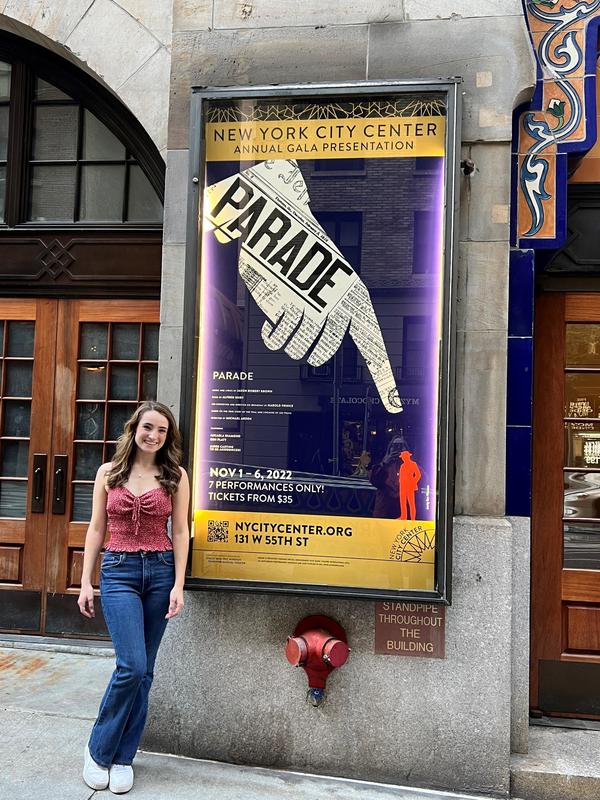 Sophia Manicone, a senior at Fairfax Academy for Communications and the Arts, Performed in NY City Center 2022 Gala

Fairfax Academy for the Communications and the Arts senior Sophia Manicone fulfilled a lifelong dream and performed in the New York City Center’s Gala production of the Tony-winning musical, Parade. Manicone beat out over 500 other performers vying for the role of Iola Stover with a video submission and was called up to New York to audition in person.

Sophia’s classmates and teachers at Fairfax Academy and her base school Madison HS, supported her from home and went to see her performance. Over 50 friends and family members made the trek to New York City on Saturday, which happened to coincide with Sophia’s birthday.

“Seeing Sophia in the halls – you would have no idea that there is a star standing in front of you,” says Andrea Cook, administrator for Fairfax Academy. “She is humble, polite and a bright light when she walks into the Academy. You then see her step in front of an audience during class or at a show, and it’s clear that she is a force of nature. She is a gem to work with, always takes notes and feedback with grace, and is a huge supporter of her peers! I know her future is vast, and I cannot wait to see where her journey goes next.”

“They say to make it in the performing arts you’ve got to have the “it” factor. Well, I saw “it” in Sophia Manicone from the very first day we met,” said Erich Dicenzo, Director of the Musical Theatre and Actor’s Studio at Fairfax Academy. “Not only is she incredibly talented, but her work ethic, passion, and – above all else – kindness have made her a true joy to teach over these last three years. Fairfax Academy’s Musical Theatre & Actors Studio is designed to prepare students for the very endeavor Sophia is now experiencing…and I’d be hard-pressed to think of someone more deserving. As her Director, I couldn’t feel more pride. If you can’t make it to New York City yourselves, I encourage you to check her out as Elle Woods in Musical Theatre & Actors Studio production of Legally Blonde this February!”

The Musical Theatre & Actor’s Studio [MTAS] at Fairfax Academy is the perfect place for students who are passionate about exploring their creative endeavors! By offering a diverse, specialized curriculum focused on professional pursuits and college & career readiness, students in the Musical Theatre & Actor’s Studio can expect to be exposed to industry-standard training and exceptional educational opportunities.  Whether you are planning to attend a performing arts college/university, hoping to jump into the professional world, or are just curious and ready to learn more about the performing arts profession, let the Musical Theatre & Actors Studio be the next step on your journey! www.mtasacademy.weebly.com

About the New York City Center:

New York City Center has played a defining role in the cultural life of the City since 1943. The distinctive NeoMoorish building was founded by Mayor Fiorello LaGuardia as Manhattan’s first performing arts center with the mission of making the best in theater, dance, and music accessible to all audiences. This commitment continues today through celebrated dance and musical theater series like Fall for Dance Festival and Tony-honored Encores! series as well as new dance series Artists and the Center and the City Center Dance Festival. Dedicated to a culture built on the principle of diversity, equity, and inclusion, City Center welcomes more than 30,000 annual visitors to experience internationally acclaimed artists on the same stage where legends like George Balanchine, Leonard Bernstein, Barbara Cook, Martha Graham, and Paul Robeson made their mark. www.NYCityCenter.org